Near West Side Real Estate For Sale in Chicago, IL 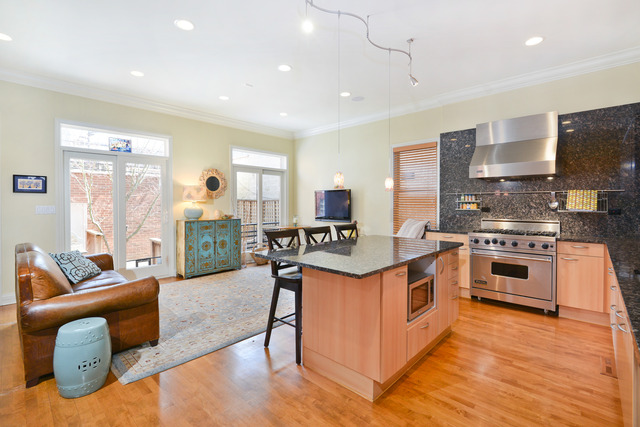 Chicago hugs the lake, and why not?  We love it!  Sparkling in the sunshine, vast and powerful, it’s an inland sea wafting its cool breezes across the city.

But that beautiful lake always puts Chicago’s West Side at a sore disadvantage.  It was like being stuck in the cheap seats, always straining on its tiptoes at the back of the crowd to catch a glimpse of what’s going on down front.  While spectacular skyscrapers loomed over the lakefront with its spacious public parks, the West Side was reserved for the working man’s world of warehouses and factories.  Grant Park?  That was the big fancy dining room.  The Loop?  Its lively bar.  And the Near West Side?

Yeah, right.  That was the steamy kitchen where all the dirty work got done.

And that’s the way it was for a long time.  By the end of the seventies the Near West Side was gazing groggily at a shabby present and a bleak future.  Once bustling factories and warehouses stood derelict waiting to be bulldozed into parking lots. West Madison was a scuzzy Skid Row, a mean street of cheap spirits, broken bottles, and the broken spirits that go with them.

Search Near West Side Real Estate For Sale in Chicago, IL

Save This Search Refine This Search
Show Map
235 Properties Found.
Page 1 of 14
Next
Temporarily No Showings

WHAT'S YOUR NEAR WEST SIDE HOME WORTH?
Thinking of selling your home in Near West Side? Get a FREE property assessment now!

More About Chicago's Near West Side

Okay, now flash forward to the 21st century.  Is the West Loop still the poster boy for urban decay?   Um, actually, no.  It’s one of the hippest, most distinctive and convenient residential areas in the city.

Within walking distance of the Loop, the Near West Side enjoys its grassy public spaces like Union Park, home of the annual Pitchfork Music Festival, and pup-friendly Heritage Green Park on West Adams.  It offers block after block of enticing eateries from the trendy to the traditionally ethnic along its “restaurant rows” on West Randolph and down South Halsted.  Living is easy with handy shopping options like Whole Foods, Dominick’s, and the délicieux Chicago French Market on North Clinton, not to mention neighborhood storefronts and big-box operations like Target and Home Depot along Roosevelt Road.  All this plus high-rise condominiums, elegant townhomes, and the greatest collection of exposed brick and timber lofts the city has to offer.

In the early eighties, a political stew of insider clout, dicey tax breaks and tax-exempt bonds gave rise to an unlikely development scheme:  six modern apartment towers to be built in a row down West Madison, one of the most dismal blocks in town.

By 1986 it was only four high-rises, the 49-story Presidential Towers, and it was a development that faced a tough sell to a doubtful public, narrowly avoiding foreclosure in the nineties.  But, no question, those towers dramatically altered the skyline, defiantly marching the Loop further west, and over time it helped change people’s thinking about the Near West Side. With the central business district right there, immediate access to all major expressways, and the lakefront, while obscured by a forest of skyscrapers, still close at hand, it dawned on a few urban pioneers that—y’know what?—it could be exceedingly cool to live RIGHT HERE.

Of course, way back when, it was pioneers—just not the urban kind—who cleared the woods around the Chicago River’s south branch so they could plant crops within run-for-your-scalp distance of Fort Dearborn.  Later, in the 1870’s, when Chicago’s growth potential exploded thanks to an unfortunate cow-meets-lamp incident in the O’Leary’s barn, that limitless West Side looked particularly ripe for industrial development.

Not that a few folks didn’t end up living there too.  Especially Greeks.

In the mid-19th century Greek seamen worked their way up from New Orleans to the Great Lakes and liked what they saw.  After the Great Fire, the promise of construction jobs plus a growing population of hungry workers lured many of them from their seafaring ways.  The word spread back home, and soon a host of Greek immigrants were peddling pita and pastitsio to lunching laborers on Lake Street.  Many made their homes on the Near West Side, turning the triangle of Halsted, Harrison, and Blue Island Streets into the “Greek Delta” or, as it is still known today, Greektown.

NEAR WEST SIDE HISTORY AND HARD TIMES

Yet the West Side’s history was never about easy living, but hard working.  Industry.  Solid, no-nonsense warehouses and grim factories squatting over whole city blocks. Labor defined the West Side for decades.  And the West Side defined labor, too.

It was here in early May 1886 that tens of thousands of workers walked off the job and took to the streets to demand an eight-hour day.  Cops had just arrived to bust up the rally at Des Plaines near Randolph when some madman lit a stick of dynamite.  Bloodshed, anarchy, arrests.  Eventually, the gallows.  Over a century later the socialist nations of the world still celebrate May Day, an international holiday for the working man, and we Americans casually take for granted the eight-hour work day, the forty-hour week.

In Chicago, where it all happened, there’s little commemoration.  The Haymarket Riot doesn’t haunt the ’hood.  It’s less than the rumor of a ghost.  The statue honoring the seven murdered policemen was pulled down by a new generation of protesters in 1969.  Little now remains to evoke the violent and profoundly historic events that shook the West Loop so long ago.

Post-world-war booms spurred development here and throughout the city, but as the 20th century aged, so did the West Loop.  As in so many other cities, urban unrest of the sixties and disinvestment in the seventies left Chicago’s downtown high and dry.  No one even dreamed of living in the Loop back then, and as businesses headed to the suburbs, fewer people even worked here.  State Street “that great street” was barely a street anymore but a “pedestrian mall” in a desperate attempt to revitalize a dwindling downtown.

But, slowly, things were changing for the better.

After the Presidential Towers gamble of the mid-eighties, residents began returning to the area.  Artists opened galleries in empty warehouse spaces north and west of the Loop, often a harbinger of gentrification.  Prospects were improving.  And all those vast, empty loft spaces started to look like intriguing living spaces.

LIFE IS A LOFT ON CHICAGO'S NEAR WEST SIDE

Right around the same time those tenuous towers were rising on West Madison, a Columbia College photography professor named Lewis Kostiner and his wife Annie saw a ground floor opportunity much closer to the ground.

With cookie-cutter suburbs now as crowded as cities and the Loop growing livelier than ever, they believed the time was ripe for yuppies and empty-nesters to move back to where the action is—especially if there were some really cool, distinctively urban places to live.

Luckily, the Kostiner’s knew the magic words:  Let there be lofts.

Their firm Annie Properties became one of the first to redevelop disused Class B office buildings south, west, and northwest of downtown into alluring brick-and-timber loft apartments.  With thirteen such developments in the West Loop alone, they were major players for twenty years in creating the unique community here today, drawing thousands of tenants along with businesses like Starbuck’s, Johnny’s IceHouse, Detour 2 Discovery Day School, and Wishbone, the popular “Southern Reconstruction”-style restaurant near Oprah Winfrey’s Harpo Studios.

Not only did Lewis and Annie Kostiner bring life back to these once-deserted streets, but through their hip reimagining of square concrete industrial sites, they actually helped define the quintessential West Loop lifestyle itself.

THE TRUE BLUE FAN BASE

The West Side has plenty of fair weather fans these days, of course, rallying around its renaissance.  Yet it’s worth noting that there were some hard core fans all along, better known as Bulls and Blackhawks fans, for whom the West Side was always the best side.

While the mammoth United Center on West Madison is to many the House that Jordan Built, Michael’s iconic statue out front is a relatively recent addition.  Statues of hockey legends Bobby Hull and Stan Mikita recall the long sports history associated with this side of town.  Before United Center opened in 1994, it was the Chicago Stadium that brought fans and concertgoers here for 65 years.

The razing of the old arena and the raising of a brand-spanking new one played a big role in revitalizing this outer edge of the Near West Side in the nineties.  The heady success of the Jordan-led Bulls heightened the high spirits around here, plus the United Center’s hosting of the Democratic National Convention in 1996 spurred the city to spruce up the neighborhood with new lampposts, planters, flower beds and trees, turning streets into leafy boulevards, tearing down abandoned buildings, and giving a snazzy face-lift to the Madison Street bridge that joins the Near West Side to the Loop.

BACK TO THE GREEKS

The other hard core fans of the neighborhood are, of course, the Greeks.

After the Eisenhower Expressway plowed its path through the West Side in the fifties and UIC’s sprawling campus took up residence in the sixties, Chicago’s huge Greek-American community finally decentralized itself, spreading from Lincoln Square up north to Beverly on the South Side.  But an incredibly lively Greektown still thrives along Halsted west of the Loop as a tantalizing trove of restaurants and tavernas.  The irresistibly aromatic gyro was introduced to America right here on Halsted back in the sixties, along with the tradition of flaming your saganaki right at the table and yelling “Opah!”

Not “Oprah!”  That’s a different West Side tradition.

Speaking of Oprah, she moved to California.  Didn’t you hear?   Before cashing in her chips though, she taped her TV show at Harpo Studios right here on the Near West Side.  The show may be over but the studio remains, along with other soundstages and studios interspersed between boutique businesses, art galleries, restaurants, bars and clubs, sleek condos, rehabbed walk-ups, edgy loft spaces.  You get the picture.

These are no longer the cheap seats.  Now it’s the rest of the city’s turn to stand on tiptoe, craning its neck to see what all the excitement is.  This isn’t just the Near West Side anymore.  It’s the New West Side. For more information on Near West Side real estate for sale, contact us today.

Learn All About Chicago's Near West Side Real Estate Opportunities:

Near West Side Real Estate Statistics

Roll over thumbnail to enlarge.

The data relating to real estate for sale on this website comes in part from the Broker Reciprocity program of Midwest Real Estate Data LLC. Real Estate listings held by brokerage firms other than Fulton Grace are marked with the Broker Reciprocity logo or the Broker Reciprocity thumbnail logo (a little black house) and detailed information about them includes the names of the listing brokers. Some properties which appear for sale on this website may subsequently have sold and may no longer be available. The information being provided is for consumers' personal, non-commercial use and may not be used for any purpose other than to identify prospective properties consumers may be interested in purchasing. Information deemed reliable but not guaranteed.