Ever since its completion in 1926 it has been riding the crest of new technology, booming business and trendsetting lifestyles, always playing a significant role in a vibrant, evolving city.  First as a place of innovations that changed the way the world does business, later as the headquarters of a fashion industry leader, and today as a pioneer in stylish downtown living, Haberdasher Square lofts is home to those who are one step ahead of the game.

THE ARCHITECT OF HABERDASHER SQUARE LOFTS AT 728 W. JACKSON 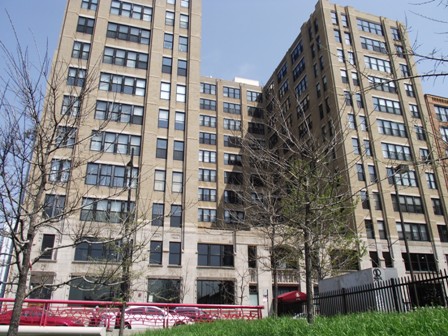 The building was the brainchild of Chicago architect Alfred S. Alschuler.  A prolific designer, he began his career under the tutelage of Dankmar Adler, one of the giants of Chicago architecture, but he didn’t stay long under that wing.  Ever since the Great Fire thirty years earlier Chicago had been America’s living laboratory of modern urban construction, so there was plenty of opportunity for someone of his ambition and talent.  As a founding partner of Treat & Alschuler, he went on to create a range of structures from factories to synagogues to office towers, chiefly during the 1920s, an epic era of development in Chicago.

Sadly, too many of his works fell to the wrecker’s ball over the years.  And yet, the future of Chicago’s unique architectural heritage now has a champion thanks to a belated appreciation of Alfred Alschuler, for it was the widely-protested demolition of his Chicago Mercantile Exchange Building in 2003 that prompted the creation of the Landmark Commission, the city’s most powerful advocate of historic preservation.

THE INVENTOR AT HABERDASHER

It started out life as the new headquarters of A.B.Dick, a high-tech enterprise of its day.  Founded on that same site as a lumber company in the 1880s, the company radically changed its focus when its innovative founder, Albert Blake Dick, got fed up with the repetitive handwritten paperwork required to run a business.  New technology fostered by Thomas Edison inspired him to seek better solutions, and their collaboration resulted in the Edison-Dick mimeograph, the world’s first document duplicator.  Other inventions followed—first a letter-folding machine, then an adding machine—and suddenly Albert Dick was no longer in the lumber business.  By improving efficiency in his own office, he revolutionized every single office in the world—and made a sizeable fortune doing it.

With business growing apace, he hired Treat & Alschuler to design a new headquarters for this most modern of companies.  The result was a powerful, 8-story neo-Gothic structure crafted of brick and reinforced concrete, as solid as the company that occupied it.  A.B.Dick forged ahead with new advancements in office machines, weathering the storm of the Great Depression without laying off a single worker while even expanding the building by adding four and a half more floors.  When they finally outgrew their space 728 West Jackson Blvd. in 1949 and headed for the suburbs, it was the founder’s millionaire grandson, A.B. Dick III, who signed over the Haberdasher Square to its new owner.

With that new owner came the name by which the building is still known.

Hart Schaffner & Marx was already a major player in the garment industry by this time.  What started in 1872 as a humble haberdashery on State Street had grown into a major marketer and manufacturer of men’s clothing, reporting $15 million in annual sales as early as 1910 and well on its way to becoming the largest men’s clothing company in America.  When it took over A.B.Dick’s famous old headquarters, it staked its claim loud and clear.  For years the words HART SCHAFFNER MARX stood out in huge letters erected on the building’s roof, as familiar a sight to commuters on the Kennedy Expressway as the old Playboy sign was to drivers on Lake Shore Drive.

Times change, of course, and fortunes come and go.  In the 1970s HSM’s dominion over the clothing industry made it too big for its britches according to Uncle Sam, and  antitrust regulation slowed the company’s growth.  It continued to rack up over $600 million in sales afterwards, but its success had peaked.  By the end of the 1980s the firm, now known as Hartmarx, faced some of its worst losses ever.  In a drastic move it switched to wholesale, selling off all its retail stores, all its factories—and its historic headquarters, the Haberdasher Building. Those giant letters on the roof came down, never to return.

But the Haberdasher Square Lofts story doesn’t end there.  Having served its occupants at the forefront of technology and fashion, the Haberdasher square was ready once again to grab the reins of change and lead the way.

Much had changed since the old days when Albert Dick ran a lumberyard at Jackson and Des Plaines.  The city center was no longer just a place to work during the day and close up shop at night.  Downtown’s attractions had become too enticing.  People wanted to find a way to live there, right in the heart of it all. 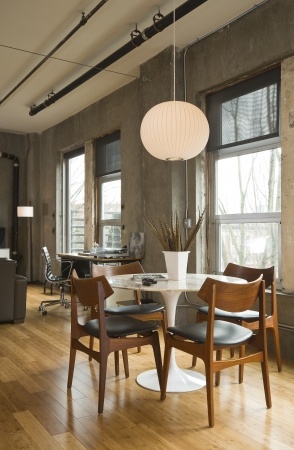 Haberdasher Square Lofts, located at 728 West Jackson, has led a charmed existence since 1926, thanks to a remarkable gift for reinventing itself as times change. In a town famous for razing historic sites to make way for towering skyscrapers. The final decade of the 20th century, Chicago’s downtown was changing again.  The Loop used to be a place that closed up shop at night, emptying its streets as commuters made the long trek home to the suburbs.  But by the 1990s young professionals wanted a better option.  Downtown was loaded with attractions.  “Why just work here?” some began to wonder.  “Why not live here at Haberdasher Square too?” Then, in 1993, just as this notion was percolating in people’s heads, the struggling Hartmarx Corp. decided to abandon its home in the Haberdasher lofts.  The location was perfect, within walking distance of the Loop yet west of the river in a neighborhood of its own.  Pioneering developers leapt at the chance, and the two-year conversion process began.

In its second phase, doorways were opened into the adjoining building to the east, formerly the Wurlitzer Jukebox Company, to provide even more room for incredible loft living spaces.  The Haberdasher Square lofts, once home to a great American inventor, was being reinvented once again.

While its stylish neo-Gothic entrance—guarded by stone gargoyles representing, so the story goes, Albert B. Dick’s mentors and peers Thomas Edison, Henry Ford and Calvin Coolidge—leads up to a limestone foyer embellished with ornate brass detailing, the Haberdasher in general bears the forthright stamp of the Chicago School:  modest ornamentation, wide windows, and a muscular exterior that frankly discloses its internal framework.  Fortunately, for modern tastes, these characteristics create a perfect canvas for contemporary interior design styles, with those huge windows offering plenty of natural light to enhance broad, gleaming stretches of finished hardwood floors, exposed brick and terra cotta walls, and lofty 12-foot ceilings.

After crossing the classic threshold under the gargoyles’ protective gaze (assisted in their duties by a 24-hour door staff) residents find a range of amenities, from the simply practical like storage lockers, a freight elevator and a bike room, to the exceptional, like an on-site dry cleaners and an exercise room, updated in 2008.  For those seeking a more aerobic workout, there’s even an adjoining, indoor half-court for b-ball.  In 2009 the fabulous rooftop deck was completely redone, creating not only a super hotspot for summer sunbathing but for Wi-Fi too. As residents relax, the crack onsite management crew including building engineers and housekeeping staff keep the whole place running smoothly and looking shipshape.

As for the neighborhood, the nearby attractions are truly too numerous to mention.  Standouts include Greektown to the west and Randolph Street’s “restaurant row” to the north—not to mention the entire Loop and Grant Park to the east, encompassing everything from the Theatre District to the Museum Campus to Millennium Park.And that’s just what’s outside your doorstep.  Getting anywhere else is no problem from a central location like this, so close to Union Station and the CTA Blue Line.  And with indoor heated parking as well as secure outdoor parking available, plus nearby access to the circle interchange of the city’s major expressways, who says it’s tough to live in the city with a car?  Nobody who lives at Haberdasher Square Lofts!

Among the pioneers of this and similar developments in Chicago is Ted Guarnero, who has sold more downtown lofts than any other real estate agent in town.  “I’ve sold units in nearly every building and neighborhood,” he says proudly, “including a lot of concrete and timber lofts in the Loop and the entire downtown area.”  Over the past 25 years, lofts have become his specialty—a particularly satisfying and endlessly fascinating one, too.  “There are a lot of lofts around the city,” he admits.  “But, in the Loop, every loft building is completely different.”

Yet, as unique as each one is, Ted will tell you from an expert’s perspective that few can beat the Haberdasher Square Lofts.  The combination of its amazingly central location, its handsome design and the superior quality of this historic structure itself help explain why Haberdasher Square Lofts became one of the first and most successful condominium conversions in downtown Chicago, the trailblazer in a trend that lets you fully embrace the excitement of city living from the comfort of a spacious, one-of-a-kind home.

The data relating to real estate for sale on this website comes in part from the Broker Reciprocity program of Midwest Real Estate Data LLC. Real Estate listings held by brokerage firms other than Fulton Grace are marked with the Broker Reciprocity logo or the Broker Reciprocity thumbnail logo (a little black house) and detailed information about them includes the names of the listing brokers. Some properties which appear for sale on this website may subsequently have sold and may no longer be available. The information being provided is for consumers' personal, non-commercial use and may not be used for any purpose other than to identify prospective properties consumers may be interested in purchasing. Information deemed reliable but not guaranteed.