Welcome to your local Gold Coast real estate for sale resource. Chicago's Gold Coast ranks among the most exclusive neighborhoods to purchase real estate making it without a doubt one of the most affluent zip codes ( 60610 ) in town. Buyers are drawn to the Gold Coast because of the historic atmosphere, the fabulous nightlife, the one-of-a-kind shopping experience, and the spectacular views and Lake Michigan. For more information on Gold Coast properties for sale or to schedule a private showing, contact your Chicago real estate experts today!

Plan to buy or sell a condo unit in Gold Coast? Contact the Seventy7 Group at Fulton Grace, your local real estate agents, for guidance through the Gold Coast condominium market. Connect with us at (312) 810-6693 today! 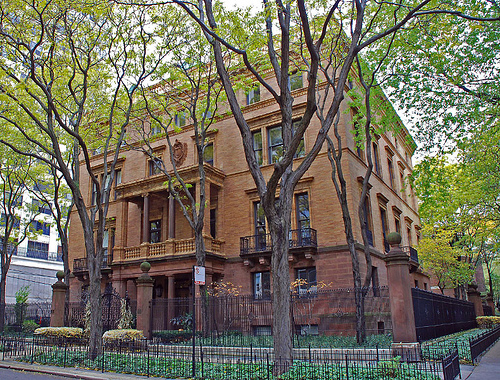 Chicago's Gold Coast real estate offers some of the best single-family homes, lofts & condos for sale in the city. Despite the Gold Coast's affluent reputation, real estate here can often be more affordable than one might think. Condominiums start as low as $129,999 and most tree-lined streets offering graystone condominiums starting around $400,000. Vintage condos start around $250,000 and single-family homes begin at $2,000,000 and move up to over $10,000,000.

Those interested in living within a historic area of Chicago complete with all of the bells and whistles should look no further! Buyers will find many Gold Coast homes for sale represent stunning examples of quality architecture. The Gold Coast has a unique collection of real estate, from luxury mansions, cozy lofts, historic row houses, condos, and apartments - with some constructions ranging back to the 19th century. Astor Street, in particular, has a beautiful collection of historical homes in a variety of revival styles.

For homebuyers in search of condos in the “city that never sleeps” type of neighborhood, this area fits their dream! On the surface Gold Coast real estate is a historic gem: an area rich with culture and qualities more elite than any other Chicago neighborhood lined with street after street of high-rise condominium towers, those in search of that true luxury living lifestyle shall look no further than the Gold Coast.

From unstoppable daytime crowds to plenty of Oak St. beach action, the Gold Coast remains one of the most vibrant areas of the entire city. On any given day, whether January or July, the Gold Coast is, without a doubt, any prospective renter or luxury condo buyer’s paradise. Alas, let the boredom vanish: the Gold Coast will ensure the folks remain lively, youthful, and entertained. 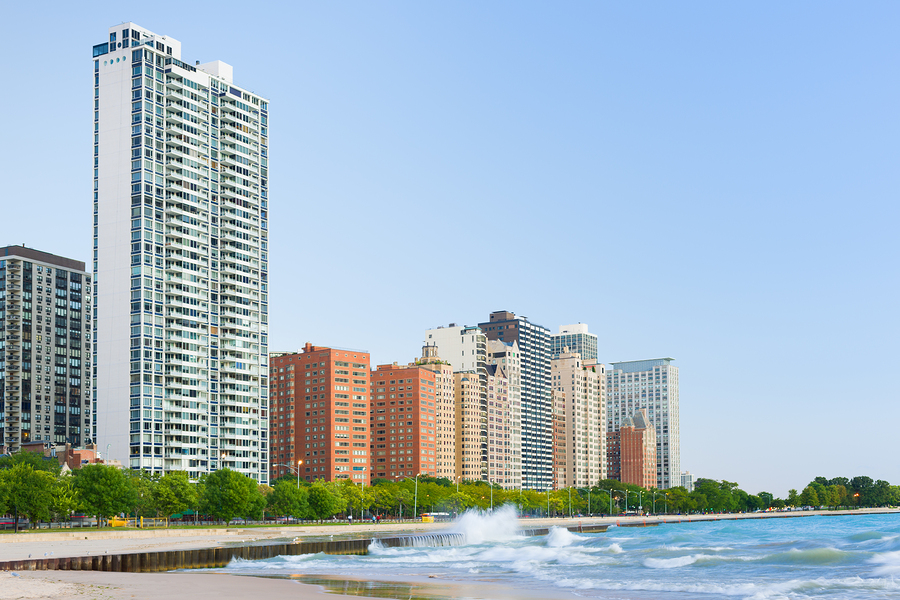 Bounded by North Avenue, Division Street, Chicago Avenue, and Lake Michigan, the Gold Coast boasts a plethora of fine restaurants, infinite shopping opportunities, various public transportation routes, and enough bars and nightclubs to make one not even want to leave the bustling neighborhood.

Along with the Streeterville Chicago neighborhood, the Gold Coast can lay claim to the shopping mecca of North Michigan Avenue—the “Magnificent Mile”—with its upscale retailers such as Bloomingdale’s, Neiman Marcus, and Saks Fifth Avenue. Still, to some, shopping in true Gold Coast style is a more discriminating, sophisticated affair, and you will find it centered on East Oak Street. Literally, off the beaten path of Michigan Avenue, East Oak boasts a haven of haute couture, salons and spas, high-end clothiers, designer studios, and avant-garde boutiques specializing in that one-of-a-kind fashion find.

Art galleries abound here, too, as well as in River North to the west; therefore, it is hardly surprising that the Gold Coast Art Fair is one of the city’s most popular summer events. This 3-day affair, renowned as the “Granddaddy” of American art festivals, has been attracting artists from around the world since 1957. Its unflagging popularity places it among the top 25 festivals within the U.S.

The corridor between North and Division, which is essentially the heart of the Gold Coast, was originally dubbed the Astor Street District in the late 1890s. Honoring the illustrious John Jacob Astor, a staggeringly successful New York real estate investor—a multibillionaire by today’s standards—the name was a lure to the city’s elite, shedding its radiance on all who earned the privilege to live within this area. As more people sought a plot in the prized community, colossal mansions gave way to narrower townhomes, and it was not long before construction began moving in the only direction left to go: up! So, it is that today the Gold Coast Chicago neighborhood has matured into a heady blend of historic mansions, distinctive row houses, and towering high-rises that overlook Lake Shore Drive and Lincoln Park.

Along quiet, verdant streets lined with stately homes, the Astor Street District still evokes the grandeur of bygone days. Though the Palmer Mansion was demolished in 1950, many superb examples of Victorian Era architecture remain, such as the Charnley-Persky House on North Astor, which was an early collaboration between Louis Sullivan and a promising young draftsman named Frank Lloyd Wright. This monument today provides an apt abode for the Society of Architectural Historians. You may think you have stumbled into a Dickens novel when you view the Archbishop Residence, a sprawling mansion on North State Parkway dating back to the 1880s, which is the oldest remaining home in the Gold Coast. Its many gables and balconies, chimneys, turrets and towers are indicative of the Queen Anne design, one of the dominant architectural styles you will see here, along with the rounded arches and conical roofs of the Romanesque school and the formal, classical symmetry of Georgian Revivals.

Dining in the Chicago Gold Coast

Dining options are diverse and plentiful, notably around Rush Street, which has long relished its reputation for exuberant nightlife. But there is more going on here than just signature dance clubs such as Mother’s and Butch McGuire’s located on the bustling Division St. The restaurant options are abundant and fabulous, particularly when it comes to Italian fare—Carmine’s comes to mind—and exceptional steakhouses such as Gibson’s and Tavern on Rush. Other notable restaurants that attract various crowds are Le Colonial, Lux Bar, Blue Agave, P.J. Clarke's, and the newly opened location of the Gold Coast Chicago restaurant, Lou Malnatti's. 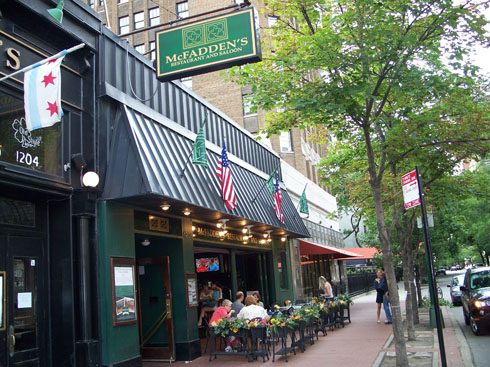 After-dinner watering holes are hardly in short supply either, ranging from the tragically hip to the classically cool. Whether you prefer dancing between cocktails at Proof, digging jazz riffs at the BackRoom, or mellowing over martinis at Jilly’s Piano Bar, there is surely a venue suitable for every taste, style, and preference. Let us also not forget to mention the ever-popular Division Street where thirsty patrons can visit Finn McCool's, Lodgebar, Shenannigan's, Mother's Too, Bootlegger's, and The Cedar Hotel, and Leg Room. Division Street surely will appeal to all ages, tastes, styles, and bar preferences.

Rush Street represents the Gold Coast’s young and wild side. Similar to a chapter in any good book, Rush Street is only a small part of a long, unfolding story. The Gold Coast has a sterling reputation to uphold, one that has been well-served by the Gold Coast Neighbors Association, a group devoted to the preservation and beautification of this extraordinary community for over 50 years.

Just about anyone can celebrate on Rush Street, and the Mag Mile is a magnet for any type of shopper. However, these streets represent only the outer edges of the Gold Coast where the restless world races by on a daily basis. The commotion quickly fades once you delve into the heart of the Gold Coast neighborhood when you stroll past stately homes, a venerable library here, a museum or academy there, elegant townhouses, arching trees sprinkling sunlight over the streets, and history’s omniscient whisper in the air. The clamor of the city, the glamour of the lakefront, and the contentment of these quiet streets, which are all steeped in tradition, abide the many facets of Chicago’s Gold Coast.

Perhaps one of the best cities in the world for shopping, Chicago proudly claims the Magnificent Mile as its own street of pure shopping amazingness. Whether you are a Gold Coast Chicago resident, a suburban dweller, or an out-of-town guest, the “Mag Mile” surely appeals to all tastes, styles, ages, and walks of life.

From Bloomingdale’s to Niketown, the Magnificent Mile is every shopper’s paradise. For the sophisticated, chic female, upscale retail locations such as Louis Vuitton, Club Monaco, MaxMara, Stuart Weitzman, Coach, Gucci, and Kenneth Cole stand perfectly along with these 8 blocks. For those not looking to completely break the bank, the 900 N. Michigan shops, located in a multi-level mall, offer a variety of fashions suitable for everyone in the family. And what would be magnificent about a mile without the world’s best department stores? Shoppers will surely appreciate Macy’s, Saks Fifth Avenue, Neiman Marcus, and Nordstrom. Yet, not to worry bargain hunters: check out Filene’s Basement and H&M for that great deal! 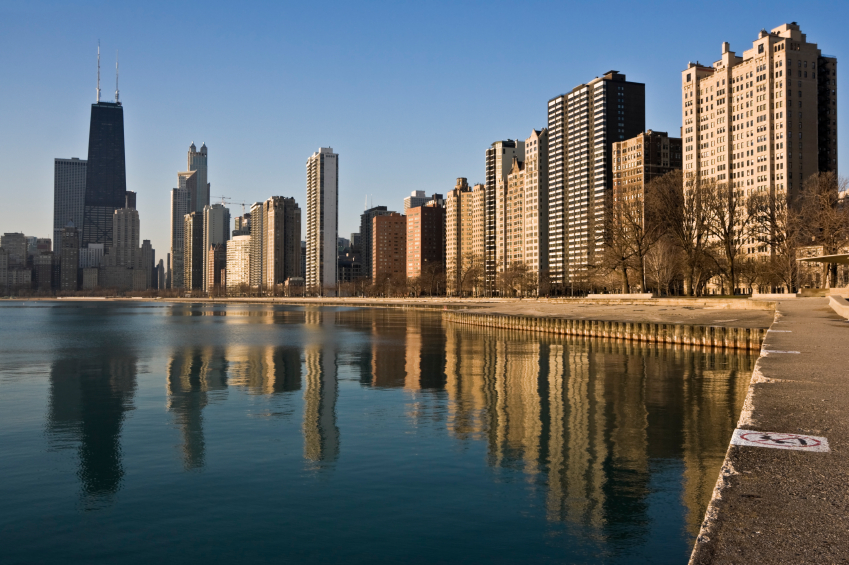 After the Great Fire of 1871, local millionaire Potter Palmer left the devastated South Side to build a new home in the less-developed region north of the river. Chicago’s wealthy inhabitants had long resided south of town along Prairie Avenue, but Palmer always had his eye on Gold Coast housing and was quietly buying up parcels there even before the fire struck Chicago. In the wake of the disaster, he saw his chance and capitalized on the opportunity.

The need to dispose of charred rubble by the ton proved a convenient way to extend the Gold Coast into the lake, using landfill to create a brand new lakefront. Seizing the opportunity, Palmer ordered a lakeside marsh filled in along what is now a stretch of North Lake Shore Drive, and there, on virgin ground, he built his Xanadu: a 42-room, Gothic mansion which was nearly as much a castle in appearance as character. Palmer planted his standard on the North Shore—a gold standard no less. It was not long before he was joined by the remainder of Gold Coast's upper crust, and the exclusive character of the new community has held sway ever since Palmer took the lead. One hundred years later, Chicago's Gold Coast real estate market still ranked as one of America’s most affluent neighborhoods, second only to the Upper East Side of Manhattan.

Looking to purchase a condo or loft in Gold Coast? Let our Chicago real estate team guide you through the sale of your current residence or the purchase of your new Gold Coast property. As local real estate agents, we have up-to-date information on the unique dynamics of the Gold Coast real estate market.

Contact the Seventy7 Group at Fulton Grace to learn more about representation for buyers and sellers. Preparing to sell your Gold Coast property? Head to our free market analysis page for a condominium value estimate within moments.