Once a highly industrial area and home to Chicago’s meat packing and food processing facilities, today the Fulton Market District (also referred to as the Fulton River District) is a hip and trendy area that is quickly becoming a popular place for young artists, tech professionals, and other creative types. Much of the neighborhood was rebuilt after the Great Chicago Fire in 1871, meaning that the architecture and character reflects the style of that time. Home to a variety of creative and tech offices (including Google’s new Chicago headquarters), Fulton Market real estate for sale is in a neighborhood transition that offers some interesting and unusual housing options. Much of the residential real estate in the area is found in converted warehouses and manufacturing facilities, but there are new construction condos and lofts are also being built. Read more about Fulton Market real estate.

More About Fulton Market Real Estate For Sale Below: 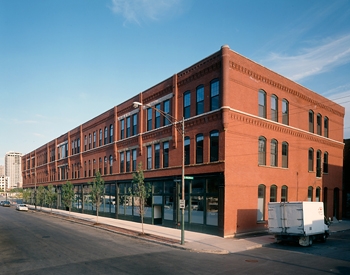 The Fulton Market District is bordered by Lake Street to the south, Carroll to the north, and the Kennedy Expressway and Aberdeen Street to the west. With several Chicago Public School System options nearby, including elementary, middle, and high school options, along with private schools (both religious and secular), anyone with children seeking Chicago real estate on the west side of the city will be surprisingly well served in the Fulton Market District.

Where is Chicago's Fulton Market Neighborhood?

Consisting of the northeast section of Chicago’s Near West Side, bordered by the Chicago River to the east, Madison Street to the south, and the Kennedy Expressway to the West, this neighborhood is home to the Ogilvie Transportation center, with Union Station only a short trip away.

Many of these reclaimed industrial buildings feature interesting layouts, rooftop decks and private terraces, fireplaces, exposed ductwork, vaulted ceilings, oversize windows, and other features that ensure that Fulton Market condos stand out from other Chicago real estate on the West Side. High rises and mid-rises in the Fulton Market area also feature panoramic views of downtown to the north and south, along with the Chicago River to the west.

With plenty of hip lounges, trendy clubs, and chic restaurants, Fulton Market real estate is in a location with some of Chicago’s hottest nightlife – ensuring that residents will never be at a loss for something interesting to do any night of the week. While there are plenty of neighborhood dives and casual coffee shops, the Fulton Market area is also home to some world class dining establishments, including Grand Achatz’s experimental Next with its constantly changing menu.

Nightlife choices abound in Fulton Market, including the notorious Twisted Spoke (a biker bar with killer Bloody Marys), Players Bar and Grill sports bar (a perfect place to watch any of Chicago’s teams), and the Chipp Inn, a classic Chicago dive with regulars who have been going there since before Fulton Market even began to be gentrified.

Despite the popularity of many of Fulton Market’s eateries, there are several mom and pop places that have hardly changed over the last few decades, lending the area a unique character that is appreciated by long-time and newer residents alike. These include local dive bars, greasy spoons, and diners as well as convenience stores, dry cleaners, cobblers, and tailors. Moreover, the Blommer Chocolate Company’s production facilities result in the area possessing a distinctive chocolate scent.

Noble Square’s location means that it is in the heart of it all during Chicago’s summer festival season; the Coyote Fall Festival, Wicker Park’s Summerfest, Do Division, the Renegade Craft Fair, the Ukrainian Village Fest, and all of Wicker Park and Bucktown’s Summer Sidewalk sales are right around the corner.

The United Center is nearby as well, so Chicago Bulls and Blackhawks games are easy to attend, as well as the wide variety of concerts and other events held at the Windy City’s largest arena. In addition, there are several smaller concert venues in the area, often featuring local Midwest bands and other performers. The annual Pitchfork Music festival takes place every summer in the nearby Union Square Park.

While this area doesn’t have as many parks and green spaces as other Chicago neighborhoods thanks to its industrial heritage, the many options in Noble Square, Ukrainian Village, and the West Loop are nearby. This not only ensures that the Fulton Market District is pet-friendly (in fact, the West Loop Dog Park is within walking distance, as well as several other parks where dogs are welcome), but that there are plenty of outdoor work out options. Eckhart Park along the neighborhood’s south border is also popular with dog owners.

What’s more, the Fulton Market area is near several popular local fitness centers, ranging from standard health clubs like the FFC to specialized options such as Crossfit and MMA-centric gyms. In addition, many of the condo buildings in the neighborhood have exercise facilities of their own.

While the Fulton Market District has been historically known as an industrial area, it has recently has become a popular Chicago real estate option, with loft-style condos and other reclaimed industrial spaces taking center stage. For more information about Fulton Market real estate for sale, contact Ted Guarnero at (844) SEE CHICAGO today.