A Brief Overview of Webster Square in Lincoln Park

A Brief Overview of Webster Square 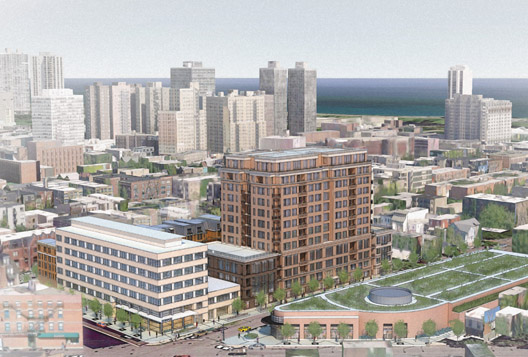 If you live in the Chicago area or are planning on moving here, you might have heard of the controversial Webster Square project currently under construction in Lincoln Park. After all, it's not very often that one single development manages to stir up so much controversy. Now that it is finally starting to take shape and being welcomed with open arms by [some] Lincoln Park residents, you may be interested to learn how it came to be, and better yet, why it almost never was!

In December 2009, Richard Zisook and Michael Supera announced their plans to convert the old Lincoln Park Hospital into Webster Square. Initially the idea was to convert the 12-story structure into 120 condos and add a 6-story building for 170 units of senior housing to the corner of Webster Avenue and Geneva Terrace. Additionally, a portion of the parking garage was to be converted into 33,000 square feet of retail space. It was also announced that the garage directly across from the hospital would be turned into a Fresh Market boutique grocery store.

Hundreds of neighbors signed a petition against this development immediately. At a community meeting it was found that most neighbors were not really against the condos or senior housing. It was the traffic of delivery trucks to the grocery store that were the concern. Some were so opposed to this idea that they held a protest December 5, 2010.

On December 16, 2012, the Chicago Plan Commission approved development, but under the stipulation that the height of the main building would be trimmed a bit and an open space on the east end of the property would be maintained to act as a buffer to nearby homes. The grocery store, which had been causing all the controversy, was also approved.

On February 1, 2011, developers for Webster Square proposed a few changes, including:

On February 17, 2011, Sandz Development received a big thumb's up from the Chicago Plan Commission. Shortly after this, more changes were announced. The 50,000 square feet of office space planned for the top floor of the Geneva Street building would be used for apartments. Also, the proposed 40-unit building planned to be built on Grant Place was to become eight row houses instead. Lastly, it was announced that delivery trucks for the market would not be permitted to use Webster Street. At this time Fresh Market, which had caused all the controversy, backed out and would need to be replaced.

By February 2013, the first stage of construction was getting set to begin. The lower façade of the hospital had been torn away, and the structure at Webster and Geneva showed signs of progress. Also, the holes were dug for the row houses. In October 2013, a significant amount of progress had been made. The single-story retail space once planned for Fresh Market was now ready, and would be occupied by Mrs. Green's Natural Market. The glass installation on the 75-unit rental building was complete, but the 120-condo structure was still awaiting its makeover.

Webster Square has not updated its official construction blog since July 2013, but it is allowing interested parties to request pre-leasing information for its luxury apartments and condos. For more information about Webster Square real estate in Lincoln Park, check our Chicago real estate blog frequently and give us a call today at (312) 566-8141!